Every week at The Marketing Eye a few of us get together for what we’ve dubbed “The Creative Meeting”, during which we throw ideas around to solve problems or wishes for clients or ourselves that we haven’t found ‘traditional’ ways for.

Often these ideas centre around our drive for hyper-personalisation, data collection and tracking across all mediums – including previously mentioned activity on audio devices.

One recent creative meeting got us talking about direct mail activity for ourselves and clients. How could we make a piece of direct mail truly personalised, so that the recipient knew at a glance that the piece was absolutely for them and them alone? Putting someone’s name on the front of a piece of mail is easy, so it’s easily ignored or forgotten – what’s the next step?

We brainstormed out a few ideas for ourselves, just to test the concept, and decided that including a screenshot of the recipient’s website alongside the marketing message would be a great way to go a step further. Their website will be instantly recognisable to them, it’s unique to them, and it’s closely tied to our services.

Amelia quickly put together a couple of good designs that would allow me to work out how to fill in the screenshot, and so I got to work. My first challenge was to get the screenshot itself, and I was most of the way there in no time by using the Selenium package in Python. The problem, as always, was with those damn cookie notices. Thanks for all the traffic last year, GDPR, but the resulting cookie notice boxes were having a massive negative effect on our artwork. A bit of tinkering later, though, and I had a tool built which would take a screenshot of any website having first removed the cookie notice. It works ~97% of the time, which was good enough for a test.

The next step was to put that screenshot into the right place on the artwork Amelia had produced, and that was achieved again with Python but this time with the PIL modules. These modules took care of combining the layers of artwork as well as skewing the screenshot to appear in the right place with the right perspective. The artwork was done.

There isn’t much point to being able to create a dynamic piece of artwork to send, though, without a way to send it. The final step was to plumb it all together. I used some more Python to take a signal from our Marketing Automation system’s API, create the artwork using the code from the previous steps, and then send that artwork to our partner who took care of the printing and delivery. The end result is that we can set a flag on a prospect’s entry in our CRM (either manually or as part of some marketing automation activity) and an A5 postcard lands on their desk a couple of days later, like this: 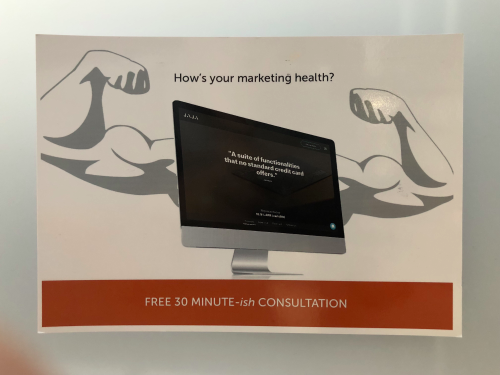 This is all well and good as a proof of concept, and for our own activity, but I’d really like to see what else we could do with the idea. Maybe you’ve got an idea for your own business, but a few we've thought might work are:

I’m sure there’s some much better uses for this concept than we’ve thought of yet. If you’d like to bounce some ideas around, then drop me an email on [email protected] and we’ll explore the options.

Jason rolls together knowledge of programming, automation and data analysis to provide a high level of technical marketing expertise to The Marketing Eye and its clients.