Dual pricing - will the ABI and BIBA joint venture prove to be another false dawn?

The ABI and BIBA joined forces last week to promote a plan with the laudable aims of resolving the age-old issue of dual pricing. It’s quite timely, as the annual BIBA conference is this week, with the FCA’s CEO Andrew Bailey kicking off the conference today.

A quick scan of articles on dual pricing down the years – here, here, here and here are just a small selection - suggests that the ABI and BIBA will be lucky if they achieve anything notable. The issue of identical risks being given different pricing – anecdotally existing customers paying more while new risks pay less – has been around for a long time. Of course, it isn’t a problem unique to insurance. The energy, television and broadband industries have grappled with this for years, despite frequent threats of government intervention.

As a backdrop, the FCA’s own study in to household premiums demonstrates starkly the penalty for staying with your insurer – a huge 70% difference by year 5. 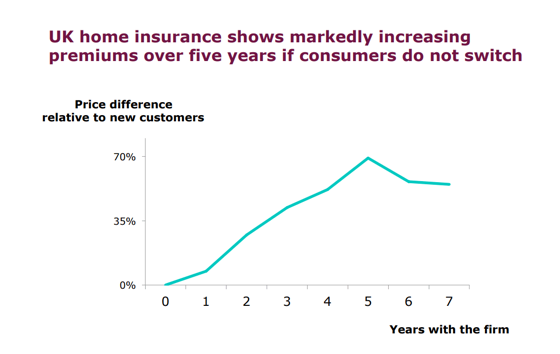 So let’s start with the positives. The jointly-written plan is a great example of what can happen when two trade bodies get together to tackle a common problem, a point they should be applauded for. Everyone will also be nodding their heads at the increased focus on improving pricing transparency and the customer experience.

The development builds on the introduction of the FCA’s new rules on renewal letter wording in April 2017, with insurers having to state last year’s premium as a comparison (while stating that the customer might want to shop around if they’ve renewed with the insurer for 4 or more years), has seen customer behaviour change – but only a little. According to Consumer Intelligence, the number of Motor customers shopping around increased by 1% to 85. For Household insurance customers, the increase was more noticeable, up by 3% to 77.6%.

Insurers still rely largely on existing customer loyalty and inertia to help fund the ‘introductory discount’ for new business. Loyalty to your insurer comes at a cost. 46% of motor insurance brands, who offered a better price to their customers once they’d threatened to leave, were able to hold on to those customers. Why should customers have to engage in this charade each year knowing that more often than not, their insurer will drop their price at the drop of a hat?

Behind the scenes, some insurers have developed code in recent years which helps them identify when an existing customer in their renewal period hits a price comparison website, and helps to return a price which matches their renewal offer. This can then trigger a call to the insurer.

The challenge can be even more strained for brokers. Dual pricing makes client retention an impossible task – the renewal is sent often without an explanation, the customer then cuts out the middle man and contacts the insurer directly, negotiates their own saving, leaving the broker without being able to add their own value, potentially losing a client.

Positive action following the ABI and BIBA proposal, rather than just words, is unlikely to come quickly, if at all. Both parties are committed to update within two years on progress and actions taken, which feels a long way down the track. Despite a lot of words down the years, the industry has found it difficult to deal effectively with the problem, and in an understandably risk-averse industry – we’re dealing in risk, after all - no-one wants to be seen to be a first mover and tackle the issue head-on.

A major factor is the fact that neither body holds the power to make the proposals a legal obligation. Insurers aren’t doing anything illegal, and every customer has the opportunity to walk away each year. But trust is the backbone of any insurer’s relationship with its customers, and the longer the status quo is maintained, the more that trust will be eroded. The only trust in town is that customers ‘trust’ their insurer will up their premium at renewal, and then have to negotiate their price down over the phone.

What does this FCA think? Well, so far, they’ve declined to comment on last week’s announcement. Will it act? Their review of Household pricing kicked off back in 2014, and just today at BIBA, the FCA has announced that it expects report key findings in Q3 this year. Treatment of existing customers is in the FCA’s 2018/19 business plan (p28), so it will be interesting to what the report says, what actions result from it, and how it complements the ABI and BIBA work.

From our perspective, any insurer that moves first on this issue will be sending out a strong brand message which demonstrates that they truly recognise and reward customer loyalty. In a market where price dominates, the issue of trust comes a strong second – and the insurer that is open and honest is more likely to capture the hearts and mind of the customer.

Everyone knows that tackling dual pricing is the right thing to do for customers. The ultimate proof will be seeing renewal premiums coming down in price. The question is, will it ever happen?

Blog: Brokers to have a year longer than insurers for Senior Managers Certification Regime

by The Team, 1 minute read